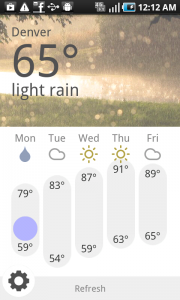 Yesterday, I published my first smartphone app. It’s for Android phones only and it’s free (no payment, no ads). You can take a look here.

I’m a bit of a graphics junkie. It’s always cool to see what developers are able to pull off.

I playing a game called “Neptune’s Pride” recently. I’ve heard about it before, and it’s generally gotten good reviews. If I had to give a one sentence description of the game, it would be “The game of Risk in space.”

END_OF_DOCUMENT_TOKEN_TO_BE_REPLACED

I recently read “Trust Me, I’m Lying”, where Ryan Holiday talks about how he would trick the media into covering stories about products he’s trying to sell. It generally took the form of “exclusives”, “leaked” documents, and attempts to manufacture outrage. By manufacturing outrage, people would talk about the product, which made it visible to people who wouldn’t have known about it otherwise. For example, he worked with Tucker Max (author of “I Hope They Serve Beer In Hell”). He’d pay for billboards advertising the movie, then vandalize the billboards, take a picture of the vandalized billboard and pass it on (anonymously) to bloggers who’d write about it. He’d show up to feminist groups on college campuses, tell them about what a terrible misogynist Tucker Max was, and get them to organize a protest – which would only draw attention to the Tucker Max book and movie. He currently works as marketing director for American Apparel (what? you thought all the bad publicity American Apparel gets is unintentional?).

In one section of the book, he talks about pageview journalism. This is a form of journalism that is directed by pageviews (i.e. as many readers as possible). Pageviews, in turn, result in getting ad-revenue because the more readers you can get on your website, the more money you can make from advertisements. In short: more readers = more money. On the flipside, the websites employ bloggers to produce stories and have even started paying them based on the pageviews of those stories. These bloggers often get very little money, but they can increase their income if they can pull readers.
END_OF_DOCUMENT_TOKEN_TO_BE_REPLACED

Last month, the gaming-website Destructoid posted a story about their discovery that half of their users are using Ad-Blocker. The editor of Destructoid wrote about it (quite nicely, by the way) and displayed a message to users to arrived at the site using Ad-Blocker. From there, the story hit Slashdot. I’ll say upfront that I have a hard time feeling entirely compassionate towards a lot of the Slashdot comments. I think it has to do with the fact that I’ve run a business, whereas Slashdot commenters are largely consuming (but not producing) so they don’t have much sympathy for businesses or financials.

Lately, I’ve been checking out a brower-based game called “OGame”. It’s a space-based 4x game, and I was curious about what they were doing. Being a browser-based game, there’s not much in the way of flashy graphics, but they use some nice 2d images to inspire the imagination of the player. (I had to laugh a little at the flashy video they put on the front-page of their website, which shows a fast-paced battle scene in space. The scene has absolutely nothing to do with the game, except, perhaps to inspire the imagination of the player. In fact, space battles are automatically handled and you don’t see any visual representations of the fight.) 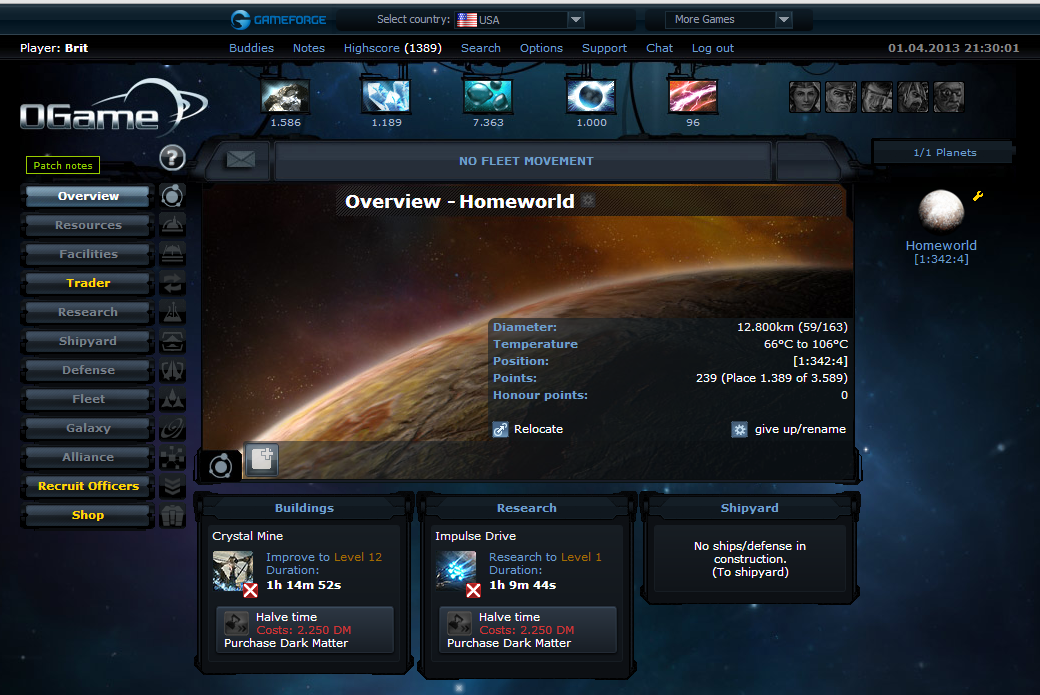 END_OF_DOCUMENT_TOKEN_TO_BE_REPLACED

At the risk of sounding old and out of touch, I’m going to admit that I don’t like Tumblr.

Why not? Their commenting system is essentially non-existent. On Tumblr, whenever someone posts something that’s wrong or should be clarified, it’s easy for other people to repost it, but hard to correct it or clarify it or comment on it.

As far as I can tell, the only way to leave a comment is to create your own account, repost the original post and then write a comment on your own post. But the problem with this is that reposting it means it shows up on your own tumblr account. If other people are following your tumblr, they see it come up as a full-post on your own blog. Sometimes you don’t want your comments to show up as a full post (not because you’re embarrassed about your comment, but simply because it isn’t significant enough to repost for your own blog-followers). This especially becomes a problem if you have a lot of followers. Imagine if you have a thousand followers and you want to leave a small comment on some tiny blog about something they posted. Now you’ve got a full post on your own blog. It’s a terrible system. Great for reposting, bad for adding new information to an existing post.

Here’s an example I ran across today. It’s not hugely flawed. It’s not some post about gun-control or politics or religion or homeopathy – something that would make people want to leave a comment. It’s just a post about the movie “Airplane”.

“And as I was passing time watching the classic film, Airplane, which came out in 1980 (and is very funny), I noted some small differences in flying in 1980 versus today:

actual silverware
actual tableware (plates and glasses)
options for meals
meals
leg room
people dressed up to fly
smoking on airplanes (there really used to be smoking sections on planes, people)
It was by no means a golden age, but planes weren’t quite yet the busses that fly that they are today.”

I first impulse was to link to an NPR story I had heard a while back. The story talked about how, back in the ‘glory days’ of Airlines, the US government regulated prices. This meant that prices were high and airlines competed by offering extras – full meals, first-class service, etc. When government regulation of airlines ended, the airlines ended up competing more on price than quality of service (because everyone kept jumping at the lowest-price fare). The result is what we have today: lower prices and lower service. Airlines might’ve had better service, but you were going to pay more for it.

Before 1978, life for the legacy airlines was pretty sweet. The government set ticket prices. If regulators didn’t think airlines were making enough money, ticket prices would be allowed to rise. Instead of competing to offer the lowest ticket prices, the airlines offered more and more amenities things like bigger seats. Some 747s even had piano bars.

Heck, some airlines even had a piano bar.

Alas, tumblr only allows me to leave this comment if I have a tumblr blog and repost it with my comment. Even then, it can quickly be overlooked because tumblr doesn’t treat comments like they are important. If I repost and write a long comment, only the first 200 characters or so will show up on the original post. So, the repost-and-comment method means that I can only leave a truncated comment. People can only read my full comment if they click on the link (so make sure those 200 characters are awesome enough to make people want to click). It’s almost like tumblr thought the whole “Web 2.0” thing of leaving comments on blogs was a mistake; that two-way communication instead of unidirectional, TV-like communication was a error made in the early, naive years of the Internet.

I was listening to a recent Point Of Inquiry podcast titled The Honest Truth About Dishonesty, where Dan Ariely explained some of the research he’s done into honesty and dishonesty.

For example, in one test, he asked people to complete a math test. Then, they were to grade their own test, put the paper into a paper shredder, and tell the researcher how many questions they got right. They would be paid one dollar for each correct answer. What he didn’t tell them was that the paper shredder was fake – they could retrieve the test and check how many questions were actually correct. What Ariely found was that the average number reported on the test was “6 correct”, but the average number of actual right answers was 4. This discrepancy wasn’t due to a small number of big cheaters. Instead, it was due to a large number of small cheaters. More specifically, out of the 30,000 people involved in his study, 12 people were big cheaters, 18,000 people (or 60%) were small cheaters, and the remaining 12,000 (40%) didn’t cheat.

One theory for the why people cheated only a little bit was that people have two opposing forces in their heads: they want to see themselves as good people and, on the other hand, they have a selfish desire to work for their own interests. So, people cheat in small ways – cheating to get an advantage, but cheating only a little bit so that they can maintain an idea of themselves as “good people”.
END_OF_DOCUMENT_TOKEN_TO_BE_REPLACED

Another application I use is called “To Do List”. It’s free software. It allows you to organize tasks into a tree-hierarchy. I use it to keep track of a lot of my ideas, which I organize into subcategories. I’ve also used it to keep track of bugs reported by users, or maintain a list of things I need to do. Here’s what it looks like: 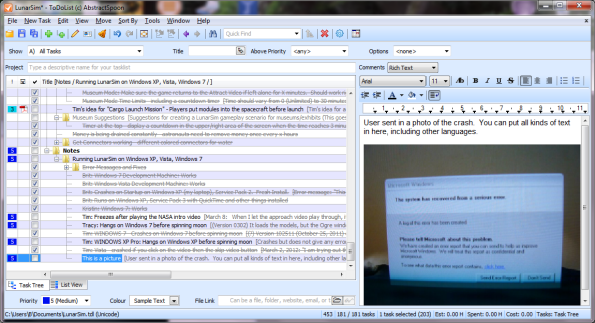 You’ll want to remove the columns you aren’t using, otherwise the interface gets cluttered with useless information. You can also write extra information into the right sidebar, including being able to copy-and-paste images into the sidebar. You can also attach a file to each item in the list.

You can get ToDoList here.

There’s a few of applications I recommend to other people. One of them is KeePass. (It’s free!) It stores your passwords in one big password-locked file. I have accounts for hundreds of different websites. It’s also a really bad idea to use the same password across all of them. For example, if some adminstrator on some website decides they want to hack into your gmail account, it’s a whole lot easier if you’re using the same password for gmail as you are on their website. Even worse, some people don’t want to remember passwords, so they use simple (easily hacked) passwords like “123456” or “password”.

If you’re using the same password everywhere, it’s a whole lot harder to change your password if it ever gets compromised. It’s not uncommon for sites to get hacked (case in point: Gawker) and if you’re using the same password on dozens of sites, it’s a pain because you’ll want to start using a new password for your Gawker account and probably your email account, too. Now you’ve got to remember which sites use your old password, which ones use your new one, or maybe you want to switch all of the websites to use your new password (good luck remembering all of them).

KeePass keeps track of all your usernames, passwords, and login URLs for you. They can automatically generate random passwords for you, too – which means your password is harder to guess, and all your passwords will be different. You’ll definitely want to keep a backup of your KeePass database, though, because if you ever lose them, you’ll be screwed.