In line with “finally checking out some games I missed”, I downloaded the demo to Torchlight the other day. The demo gives you two hours of play time. It was pretty much what I expected: a dungeon crawler with lots of hack and slash. Not much in the way of story, not that I really care. One friend told me that he played lots and lots of hours of it.

I have to admit that these types of games don’t hold that much appeal for me anymore. I didn’t even play any of the Diablo games when they came out. Of course, there was a time when I spent tons of hours playing that type of game. I played the old Dungeons of Moria when I was a kid, and spent way too many hours on it. Here’s what it looked like: 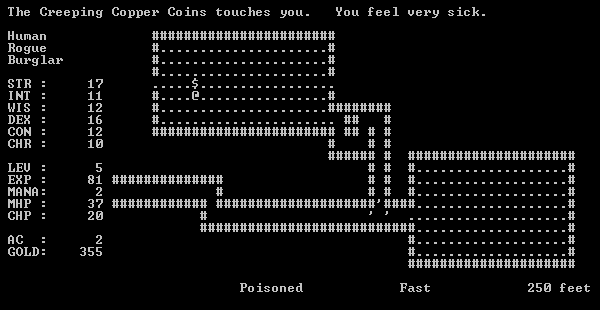 Torchlight felt a little bit like the old Moria game with much better graphics, animation, a little more variety, a few side-quests, and not much story. The problem is that I’m kind of over those types of games. I used to feel a sense of accomplishment when I’d level up my character in role-playing games (a sense of accomplishment that would quickly fade as soon as I walked away from the computer). But, I don’t even feel that with the new Torchlight game. I remember one game developer calling certain types of games “immoral” because they played on our sense of accomplishment to get players spend hours doing tasks by rote. That description applies not only to RPG “grinding” but he was also attacking Facebook games.

I think if Torchlight was a little more challenging, I might’ve enjoyed it more. Admittedly, I started the demo on “easy” because I’m never quite sure what to expect in a new game and don’t want to get in over my head while I’m still figuring things out. I played the full two-hours of the demo, and my whole strategy was simply to walk into every group of enemies and start slashing. Heck, I didn’t even have to attack. I could just turn-on my shadow armor, and it would automatically attack enemies next to me until they were dead. I was basically Superman. It worked really well. I accumulated something like fifty heal potions, and only needed to use one of them in the whole two hours I played. The main challenge seemed to be sorting out my inventory – I could only carry so much stuff, so I needed to sell off my stuff every twenty to thirty minutes. The other “challenge” was that my mouse-button finger got really tired of all the mouse clicking I had to do. It was interesting to see some new enemies and dungeons as I progressed in the game, but none of them were challenging.

Getting back to Moria and the issue of strategy: it was really easy in Moria to get yourself killed. You had to be careful, and you had to run away. I remember when I first encountered dragons in the game. They were far more powerful than I was. I eventually figured out how to create a trap for them. In moria, you were able to cut through the rock and carve out your own tunnels. I eventually figured out a way that I could carve my own tunnels to trap them and then kill them with ranged weapons without taking too much damage. Of course, there’s no sense of strategy or creativity needed in Torchlight; you can just rush forward and start clicking to swing your sword around. Even if I had played on difficult, I think the strategy would merely consist of drawing one enemy away at a time, and using ranged weapons while staying outside the enemies’ attack range. All the enemies seemed to move slowly, so it’s pretty easy just to back up and take some more shots at them. You don’t even have to use ammo in Torchlight – you’ve got an infinite amount of it.