This picture blew-up on the internet over the past few days. Supposedly, it’s an ad by Ralph Lauren. It was picked-up by Photoshop Disasters, and then displayed on BoingBoing. It actually looks like an ad about anorexia, or maybe a parody of the fashion industry and their promotion of unrealistic body images.

After the image was displayed on BoingBoing, Ralph Lauren sent them a DMCA notice telling them to take it down. Photoshop Disasters complied, but BoingBoing balked at the legal notice, said it fell within “fair use” laws (which allow the use of copyrighted material for critique), and created a post to mock them. (I have to say, it’s rather odd when a company tries to stop people from seeing an image they created as an advertisement.) While BoingBoing was heralded as heros for bravely standing up against Ralph Lauren’s attempted to suppress the image, the reality is that their ISP is based in Canada, which means it’s exempt from the DMCA (they have past experience with this). Because Canada doesn’t recognize the DMCA, it means BoingBoing isn’t bravely doing anything except grandstanding to drum up internet traffic.

I also have to admit that I’m not entirely convinced that it’s a real ad, as opposed to a fake created with photoshop by some random person and using a real Ralph Lauren image as a starting-point. It would be an interesting twist in the story if the Filippa Hamilton “ad” was actually the work of some random photoshop artist, and RL wanted it removed because it was unfairly attributed to them. It looks so bad, that it’s hard to believe that Ralph Lauren would use it. Also notable is the fact that Ralph Lauren used other images of the same model that don’t look ridiculous: 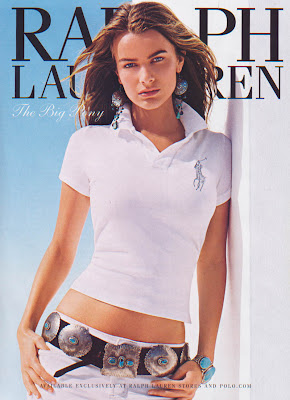 But, the story doesn’t end there. BoingBoing also has a long history of censoring people. Sure, they might like to act like crusaders against big-corporate censorship, but if they’re going to get on their soapbox, their flaws should be held up to criticism as well.

Just a year ago, BoingBoing was caught in a scandal where they “unpublished” a bunch of stories and comments by a blogger known as “Violet Blue”. A google search [Google: BoingBoing Violet Blue] shows just how badly the whole thing blew-up in their faces. No one knows quite why Violet Blue was “unpublished” – one idea is that she tried to trademark her name to prevent a porn star from using it; another is that the “unpublishing” was the fallout of a romantic relationship gone bad. And yes, they used the word “unpublished”. Not only does the word sound Orwellian, but unpublishing is exactly what happened in the fictional 1984 world:

A major theme of Nineteen Eighty-Four is censorship, which is displayed especially in the Ministry of Truth, where photographs are doctored and public archives rewritten to rid them of “unpersons”… An excellent example of this is when Winston is charged with the task of eliminating reference to an unperson in a newspaper article. (Wikipedia: 1984)

Perhaps BoingBoing uses the word “unbirthed” when they describe the murder of someone they don’t like. At the same time, I’m sure they hated the fact that George Bush used the euphemism “collateral damage” for civilian deaths, and complained that euphemisms are used to mask reality.

Then, there’s the comments section of their website. Now, it’s reasonable to have moderators for websites, but it’s clear that they use “moderation” as a way to shut down people who disagree with them. So much for free and open debate. You can disagree with them if you want – it will just have to happen elsewhere on the internet, away from the eyes of anyone reading their stories. And with that, their comments section are transformed into a cheerleading sections. I think they know that their views can’t withstand actual scrutiny, so they have to “spank” people with comment deletion, disemvowelling, and banning accounts. Here’s an one example of their censorship: a while back they posted an entry advertising an “I pirate music T-shirt”. They advocate piracy, which is obviously a controversial position, and there’s plenty of good arguments a person could raise criticizing that position. In the comments, the moderator admits to deleting eight of the first nine comments! After that, people start to get irritable about the deletions:

Right… you admit to rapid-fire deleting a ton of comments, and then suggest we have to prove the worth of our comments to you?

[To the Moderator] your post is pretty revisionist. There were a number of posts that disagreed with the shirt’s message â€” saying nothing of the price â€” that were deleted as well.

Ok, so what gives now? I had a politely worded argument about why I thought my comments were valid, and it’s been deleted with no response.

After several days, once most everyone had left the thread, they finally allow a comment articulating an argument against piracy. Who knows how many others were deleted in an attempt to prevent their readers from hearing those ideas. And there’s hundreds of people all over the internet complaining about getting censored by BoingBoing. Exhibit A, B, C, D, E, F, G, H, I, J, K, L, M, N, O, P, Q, R, S, T, U, V

Someone even went to the trouble of registering bngbng.net as a comment on their disemvowelling. I can certainly understand the irritation of spending some time writing a long comment (polite ones, even) only to have it silenced by moderators. It’s like having a big piece of duct tape slapped across your mouth. Of course, I realize there’s a difference between forcing someone to take something off their site and removing comments from your own site, but the motive behind it is still disturbing. That motive, of course, is not to save hard-disk space. It’s to reinforce groupthink of ideas they agree with. (What? You disagree with us? Nobody else is on your side; just look at the comments.)

In the end, BoingBoing is grandstanding about corporate censorship, but aren’t willing to allow open discussion on their own site – allowing only neutral or favorable comments so that they produce a facsimile of public consensus. Sounds pretty hypocritical to me. Clearly, we need better free speech advocates.

Update (January 26, 2010):
It looks like BoingBoing has cut-down on their censorship of comments. Recently, Cory posted something about O’Reilly’s eBook sales going up after removing DRM (“BoingBoing: O’Reilly drops ebook DRM, sees 104% increase in sales”). Commenters were quick to point out that Cory’s three data points were spread out at one-year intervals, and eBook sales across the entire industry (DRMed or not) have shown very strong growth over the past year. In fact, O’Reilly’s growth was actually smaller than the industry as a whole. Those stats show industry-wide eBook sales growing from around $12 million in 2008 to around $40 million in 2009, which is approximately 230% growth. It was a pretty ugly smackdown of Cory’s interpretation of the facts, but BoingBoing didn’t appear to delete the comments. Comments like:

The increase in sales is just as easily attributable to an increase in the popularity of e-book readers. It’s nice they dropped the DRM, but there’s not enough there to claim that it had much to do with the increase in sales. If you compare this graph with a graph of e-book sales overall (http://www.idpf.org/doc_library/industrystats.htm), there’s not much difference between them. This post, while encouraging, is a little dishonest.

Was it DRM that caused the increase in sales or, was it the increased consumption of ebook readers especially, mobile phone ebook readers? I did not see the connection between sales increase and DRM. Perhaps, the data are being interpreted though rose coloured spectacles?

I just no longer trust Cory’s claims on these issues any more than I trust Fox News on its take on politics. Not that I like DRM.

One thought on “Filippa Hamilton, Ralph Lauren, Copyright, and Censorship”