I thought this was pretty funny – putting cinematic game trailers next to the actual gameplay of the same game.

This one is good, too. 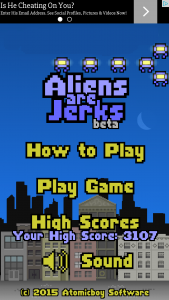 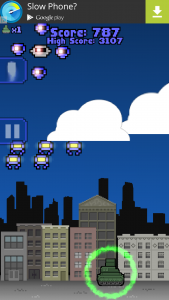 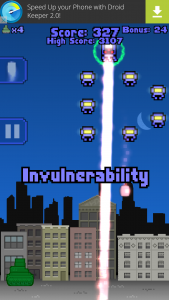 Yup. I agree with all of this. Southpark does a good job of explaining how freemium works. Recently, I heard a guy explain how much money he earned from various business models (free but with advertisements, pay for the app, freemium), and he said that freemium was the clear winner when it came to earning revenue, so I can’t entirely blame creators for using that business model.

I’m posting this because I just think the idea behind this game is hilarious. It’s a side-scrolling shooter like Metal Slug or Contra, except you’re playing as an famous hypermasculine action hero (Rambo, Mr.T, etc). I also think it’s a good lesson in how a good game concept can be viral.

It also reminded me of this video, which is also pretty cool. (It gets progressively more surreal.)

A patent troll has been going around sending threatening letters and demanding money from podcasters for violating his patent. This patent troll wants to use the legal system to force podcasters (potentially all podcasters) to make him rich while he does nothing. This is galling on several levels: it harms creators and it makes lazy patent trolls rich. These patent trolls are little more than parasites.

Admittedly, this problem is just a symptom of a larger problem with the US patent laws: the ability to patent vague processes which are obvious and high-tech versions of existing technology.

“Patent troll Personal Audio has sued top podcasters including Adam Carolla and HowStuffWorks, claiming that they own the patent for delivery of episodic content over the Internet. Adam Carolla is fighting back and has started a Fund Anything campaign to cover legal fees. From the Fund Anything campaign page: ‘If Adam Carolla loses this battle, then every other Podcast will be quickly shut down. Why? Because Patent Trolls like Personal Audio would use a victory over Carolla as leverage to extort money from every other Podcast.. As you probably know, Podcasts are inherently small, owner-operated businesses that do not have the financial resources to fight off this type of an assault. Therefore, Podcasts as we know them today would cease to exist.’ James Logan of Personal Audio answered Slashdotters’ questions in June 2013. Links to the patent in question can be found on Personal Audio’s website. The EFF filed a challenge against Personal Audio’s podcasting patent in October 2013.”

I gave money to this. So should you.
https://fundanything.com/en/campaigns/patenttroll

Recently, I stumbled on a number of stories about “Flappy Bird”, a little smartphone game. The graphics and sound are copied from Super Mario Bros. There’s only one level. There’s no complicated gameplay.

It was actually released back in the middle of 2013, but it suddenly became popular in the past few weeks.

I didn’t really pay much attention to the game until I saw two stories: “Flappy Bird is proof that no one knows what the audience wants” and “Indie smash hit ‘Flappy Bird’ racks up $50K per day in ad revenue”.

Intrigued? Here’s a video of the game:

I’ll admit that it’s a little disappointing to find out what’s popular, especially when a lot of game companies are running on shoe-string budgets or bankrupt. The developer of Flappy Bird is reportedly bringing in $50,000 a day in ad revenue. It makes me think, “Gee, I wish I had written Flappy Bird. Not because I think it’s a great game, but because I could form a pretty awesome game company and make great stuff with that money.” Of course, I’d probably just take that money and then make some complicated game with awesome graphics and AI (which doesn’t seem to be what the audience wants).

As a game developer, I’d like to think that games that require some thought and strategy would be more popular – if for no other reason than they are more challenging. I admit that I’ve spent plenty of time playing mindless first-person shooter games, but when it comes to building games, I’d like to think that I’m creating something more than making mindless entertainment (though, there’s something to be said for entertaining people). Sometimes I wonder if I’m like one of those early French filmmakers who had visions of what could be done with the medium (we’ll bring enlightenment and culture and knowledge to the masses!), but then they discovered that they go bankrupt with those kinds of ideas. Rather, the slapstick humor or Micheal-Bays-style fight-scenes and explosions are what brings the audiences and profitability.

I will say this for Flappy Bird: it’s simple to learn, it’s simple to play, like Angry Birds there’s a mixture of luck and skill involved, and it’s setup really well for competing with your friends and siblings (“I got a score of 30, what’s your best score? Ah, crap, I have to beat you now.”).

I also can’t help but think the money he’s making from Flappy Bird makes a joke of the whole idea of people getting justly rewarded for their work. There are people are working their entire lives as teachers, educating kids. Meanwhile, here’s this guy who put together a simple smartphone game, and making more money from it than they’ll earn in their entire lives.

One other thing I’ve noticed is that virtually no popular games require any Artificial Intelligence. I think there’s something interesting about the idea of playing against intelligent enemies. Instead, games either have no intelligent enemies (either no enemies, or they follow simple and predictable routines – like Space Invaders or Mario Bros.), or they have you play against other players, which saves them the work of creating AI.

I think the polygon article is spot on when it says that nobody really knows what’s going to be popular. Even Notch (of Minecraft fame) had no idea that Minecraft was going to be a success. This makes the game industry feel more like a crapshoot. (As one developer put it: “games are a hit-driven business”, which is essentially saying, “Most games are money-losers, but if you get a hit, you hit the jackpot. It’s like playing a slot machine.”) As a developer or a gamer, you’d like to think you’ve got some ideas that help you predict what’s going to be popular and what won’t be popular, and games like Flappy Bird make you throw up your hands and go, “I don’t know”. It also makes me wonder if a lot of game developers will be unable to repeat their past success. Admittedly, once they have achieved fame through games like Minecraft, they have a popularity that biases them in favor of success again (in other words they’ve got a large audience watching their subsequent games). I can think of quite a few game companies who had big success with one game, but then fell on hard times in subsequent years.

On a related note, the creator of Flappy Bird has taken down the game from the app stores. I guess he was unprepared to deal with the attention and/or money that comes from millions of players. (The game has over 10 million downloads.) You can read about it here: The Verge: Flappy Bird creator says he’s pulling the game offline tomorrow.

Who knows if it’ll be up again in the future. I predict that there will be lots of people writing clones of the game. That’s not a bad idea. Though, if I wanted to do that, I bet that I’m a little bit behind the curve already.

This comic by Saturday Morning Breakfast Cereal pretty much nails Facebook games. It reminds me of Cow Clicker – which was designed to be a parody of shallow Facebook games, but ended up becoming inexplicably popular. To be fair to Facebook games, one of the reasons I never got into MMOs is because they seemed like complex versions of this same story: “What does a higher level get me? Better weapons and tougher baddies.”

I do enjoy gritty sci-fi and AI. I love the trailer for this movie.

It seems like the real-world is starting to look more and more like this. Here’s a Boston Dynamics Video:

I have to admit, even as a software developer, that there are some things that worry me about the advances in artificial intelligence. The Terminator movies provide an example of machines becoming intelligent and turning on humans, but a more important danger is the fact that machines obey their master. With computer viruses and coups, there’s the danger of shutting down an entire army or someone taking control of a mechanized army. At least with humans, there was a person who would decide whether or not to open-fire on civilians. Soldiers could decide for themselves whether or not to support a coup.

On a related note, I’ve been working on the AI of Empires of Steel lately.

I listened to this podcast a while back, and I still think about it. I really liked what they had to say about space 4x games. You can discuss the topic on their forums here.

This is a day-by-day video displaying the frontlines and territories of the major powers in WW2.

The video doesn’t run very fast, so I recommend going to the YouTube page, hitting the “Settings” button and playing it back at 2x speed. It’s too bad the map isn’t annotated with major events – like “Operation Barbarossa”, “Allies land in Italy”, or “Allies make landfall in Normandy”.

The guy who made this video has similar videos for other wars, as well (check out his page).