Summary: Oftentimes in discussions of piracy, the word “theft” and “stealing” gets thrown around as a description of piracy. Pirates then react by complaining that piracy isn’t theft, and then the conversations devolves into an argument about whether piracy=theft. 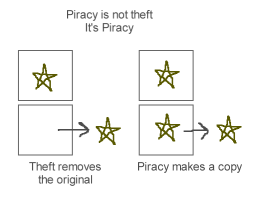 Sometimes, pirates proactively attack the “piracy = theft” idea using a graphic like the one shown on the right. (I talk about this graphic in its own post here.)

Other times, pirates will look for dictionary definitions to show that piracy isn’t theft. Example:

World English Dictionary
1. criminal law the dishonest taking of property belonging to another person with the intention of depriving the owner permanently of its possession
Source: http://dictionary.reference.com/browse/theft

Pirates will point to the “depriving the owner permanently of its possession” section to prove that piracy isn’t theft, since piracy doesn’t deprive anyone of anything.

Response: First, theft will be defined differently in different places. For example, this definition contains no mention of “permanently depriving” anyone of anything:

Theft
A criminal act in which property belonging to another is taken without that person’s consent.
http://legal-dictionary.thefreedictionary.com/theft

The original definition (which included “permanently depriving” language) also has the strange effect of allowing a thief to claim that he’s not involved in “theft” if he intends on returning an item in a few years (which may or may not be true). (“Judge, you can’t prove that I stole the car unless you can prove that I had no intention of returning it at some point in the future. Therefore, I argue that all charges against me be dropped!”) I’m sure most people wouldn’t would hesitate to call it “theft” if someone took their car, even if the ‘thief’ honestly said he’d return it in five years. I mention this only to point out the fact that dictionary definitions are a poor way to argue since they are often inadequate definitions.

Pirates will also complain that the “piracy = theft” idea is propaganda by big, evil corporations so that you’ll pay them money. (And if you believe it, you’re just another sheep who blindly believes corporate lies. See, those pirates are “enlightened” to the world; people who pay for stuff are sheep.)

While I generally think that piracy is close enough to theft that it’s perfectly fine to use the “piracy = theft” shorthand, pirates will often get emotional about this description and it can derail the whole conversation (either because they get too emotional, or they get all caught up on defining the differences between piracy and theft). In counterattacking the “piracy isn’t theft” argument, there’s a danger of a backfire effect – where pirates spend time “proving” that they are right and telling themselves how deluded everyone is who believes that piracy is theft (“Wow, they’re so stupid that they don’t even know the difference between making a copy and theft! On the other hand, I know what I’m talking about. Pirates are so much smarter; we understand nuances.”)

I’ve sometimes argued that “piracy isn’t theft, but you’re doing something wrong if you are pirate”. I’ve also argued that “piracy is theft” in the same way that sneaking into a movie theater, concert, or amusement park is a kind of theft. It’s getting something valuable for free that you were supposed to pay for – and that payment is important for keeping creators in business. If everyone acted as if piracy was okay, then we’d lose a lot of great new products, and we’d all be worse in the long-run. (See my post “Why Copyright Should Exist: The Economics of Digital Media Creation”.)

Some Pirates will admit that piracy is a “theft of income” if you would’ve bought the product, but not theft if you wouldn’t have bought the product. While I generally agree with this (I tend to go lighter on poor students or people in third-world countries), I do fear that pirates will talk themselves into believing that they “wouldn’t have bought it anyway” even when that’s not true. Also, I worry about poor pirates establishing habits of pirating stuff and will continue pirating even when they have a job and a decent income. For those reasons, I’m a little suspicious of the “wouldn’t have bought it anyway” argument, even if (from a theoretical standpoint) I sort of agree with it.

Related Anti-Piracy Responses from the Internet:

“[W]hen you pirate music, video or software, you are stealing income from the seller. You are receiving something of value without paying for it.”
Software Development Topics: No, Silly, Piracy is Theft

Return to “The Case Against Piracy”