I could go on about the numerous problems I see in her argument, but for the sake of brevity, I’ll point to just two:

The number one problem with her talk is this: she equates designers copying each other’s designs with copyright protection. In fact, what she’s talking about is more similar to patents, not copyrights. If I see an application that does “X”, and I think “I’m going to make a product just like that” — guess what? That’s totally legal. For example, if I see Quattro Pro, and think “I’ll make something called Microsoft Excel” – 100% legal. If I play a game called “Dune 2“, and think “I’ll make a game called Starcraft” – 100% legal. That’s the intellectual equivalent of a “fashion knockoff” – and it’s 100% legal in both the software industry and the fashion industry.

She supports that view in her own video when she says:

5:45-6:10
The counterfeit customer was not our customer.
…
Blakely: This is a very different demographic. And, you know a knock-off is never the same as an original high-end design. At least in terms of the materials; they’re always made of cheaper materials.

Yup. Which is exactly why the software industry isn’t that worried about someone making a ‘clone’ of their software product — because when someone copies a piece of software, they never do it quite right, it always has it’s own personality which is different, and often inferior to the original. On the other hand, copyright is used to stop exact duplicates. Exact duplicates do not exist in the fashion industry. There is no such thing as “I pirated a copy of Microsoft Office and Starcraft, but they are inferior versions of the official versions of Microsoft Office and Starcraft.” There is no such thing as “pirated bits are cheaper/inferior to authentic ones”.

So, her entire talk could really be summed up as “software patents shouldn’t exist because the fashion industry survives just fine with the existence of knock-offs”. Personally, I have no problem with that lesson.

A second major problem I wanted to point out is this misleading chart. At 12:35, she shows this chart comparing the sales of “low IP industries” (food, cars, fashion, furniture) and “high IP industries” (films, books, music). 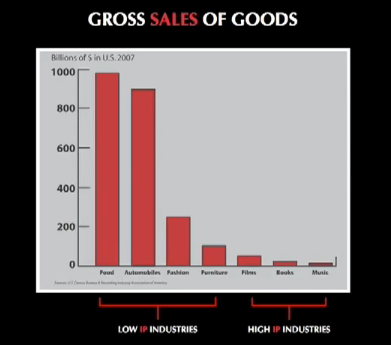 He suggestion here is that lower IP protection results in more production and more revenue. That’s an interesting conclusion.

There’s a variety of interpretations someone could make from that chart.

Since everything in the left section is physical products, everything in the right section is digital products, maybe the lesson is that physical products bring in more revenue than digital ones. Maybe the lesson is that physical products don’t need much intellectual property protection because they’re always tethered to physical items. Or maybe the lesson is that people just don’t/won’t ever spend as much money on books, music, and movies as they spend on necessities like food, automobiles, clothing, and furniture – regardless of the intellectual property protection. I have a hard time believing that eliminating intellectual property protection would somehow cause spending on books, movies, and music to skyrocket 20 or 50 fold – so that they could rival the gross sales of the food and automobile industries. Yet, that seems to be exactly what Blakely is suggesting with this chart. Can you imagine spending as much on music as you spend on food each and every week?

Here’s another little fact: the software industry, which is not shown on her chart, had a worldwide revenue of $304 billion dollars in 2008. This would place it below food and automobiles, but higher than fashion and furniture. I wonder why she left it off her chart.

2 thoughts on “Getting It Wrong: Johanna Blakely [TED Video]”