One of the obvious effects of the internet is that it’s allowed people to pick and choose news outlets that match and reinforce their own preexisting beliefs. It ends up creating communities of people reinforcing their own common viewpoint. Even worse, news stories that confirm their beliefs get brought into the internet site, providing additional “support” for their ideas. The problem is that there’s always a filter going on – the filter eliminates information conflicting with the community view, while popularizing information supporting the community view.

Now, as if that wasn’t bad enough, all information ends up getting filtered and reinterpreted – so that information which only tentatively supports a viewpoint gets reinterpreted as proving one viewpoint. I ran across a couple instances of this recently on the internet. A few cases:

Via Slashdot, I ran across an the article “Why my books are no longer for sale via Amazon”, which contained this paragraph:

Amazon still uses Digital Rights Management. This is not a customer-helpful feature. In fact, Apple iTunes has gotten rid of it, as have many other music sellers, and found that sales increase. If Amazon was doing this â€˜for the little manâ€™ then where are all their attempts to get rid of proprietary Kindle software and DRM? We know it increases sales to drop DRM, so why arenâ€™t they doing it? Customers would love it. But Amazon would lose control.

Now, like a lot of creators, I have mixed feelings about DRM. But, what I was interested in was the quote “we all know if increases sales to drop DRM”. Fortunately, he provided a link. So, I’ll bite. For someone who wants to get to the facts, what’s the evidence for his statement that “we all know”? His link leads to a 2007 Crunchgear article, “EMIâ€™s DRM-free Sales Are Working”:

Plenty of people looked disgusted with EMIâ€™s decision to turn its catalog of music loose, free of DRM. Now it seems the tables have turned, as EMIâ€™s DRM-free approach to selling digital music is working out quite well. According to reports, Floydâ€™s Dark Side of the Moon has seen a sales increase between 272 and 350 percent, while OK Goâ€™s Oh No has increased 77 percent. Those are huge numbers and could mean the difference between a paltry paycheck and a big fat one.

So with increased sales and widespread praise from just about everyone, will other record labels follow suit? Is this what the industry needed to realize that DRM just isnâ€™t the way to go anymore? Looks like it to me.

The Inquirer reports that in the short time since EMI went DRM-free with its music, its sales have skyrocketed: Since EMI ditched the DRM on iTunes it has seen sales of Pink Floyd’s Dark Side of the Moon increase by between 272 and 350 percent… According to Bloomberg, digital sales for other DRM free music increased by between 17 to 24 per cent. OK Go’s Oh No increased 77 per cent. Coldplay’s A Rush Of Blood To The Head jumped 115 per cent.

Hm. What’s BoingBoing’s source? The Inquirer.net, “EMI has DRM free sales boom” (I bolded a few interesting sentences left out of the above “news reports”.)

RECORD OUTFIT EMI is reporting that the sales results for its DRM-free music are better than those with protection. Since EMI ditched the DRM on iTunes it has seen sales of Pink Floyd’s Dark Side of the Moon increase by between 272 and 350 percent. It is too early to tell if this is just a temporary rise as punters replace their old DRM infected tracks with those which are protection free. However it does look like punters have given the record labels the thumbs up for DRM free music. According to Bloomberg, digital sales for other DRM free music increased by between 17 to 24 per cent. OK Go’s Oh No increased 77 per cent. Coldplay’s A Rush Of Blood To The Head jumped 115 per cent. Sadly CD sales still are dropping down the toilet.

And their source for this information? They provide two links, but one is dead. The working link is a blog about the music business: Coolfer, “EMI Says Dropping DRM Showing Good Initial Results, But Questions Emerge”:

Okay. So, sales jumped from 830 units/week in the 11 weeks leading up to May 30, to 3,600 (units/week?) in the 2-weeks or 2.5 weeks following. Now, my first question looking at this is: Are these results typical for all music sales after iTunes Plus, or was there some other factors involved to drive-up “Dark Side of the Moon” sales specifically, which could undermine the claim that these increased sales were due to dropping DRM.

Here’s the main question: Does an upgrade using iTunes Plus count as a scan? I can’t find out. If that’s the case, the increase in sales will actually a temporary thing. Once people who want to upgrade their tracks have done so, sales should drop and level off at pre-iTunes Plus levels (or, as EMI is hoping, above pre-launch numbers). My gut tells me SoundScan counts an upgrade as a sale. Those Pink Floyd numbers look to be more indicative of a technology-enabled sales jump than they are a sign of support for DRM-free downloads.

What about other albums? Digital sales in the last two weeks for Smashing Pumpkins’ Siamese Dream rose 17% versus the 11 prior weeks’ average. Norah Jones’ Come Away With Me jumped nearly 24%. OK Go’s Oh No increased 77%. Coldplay’s A Rush Of Blood To The Head jumped 115%.

Notably, these numbers aren’t nearly as high. It makes me wonder if other things were going on with these bands at the same time that iTunes Plus launched. Afterall, if these sales increases are caused by eliminating DRM, then why are there such large disparities in sales increases? In other words, why is there a 272% increase for Dark Side of the Moon, but only a 17% increase for Siamese Dream? I also wonder if these sales increases were picked from the albums that spiked that week. They’re only showing five albums. Are there thousands of others that showed virtually no change? And did the announcement of DRM-free tracks cause a spike in iTunes sales in general – not necessarily because they are DRM-free, but merely because iTunes was in the news? Interestingly, the lower sales percentages were dropped from the downstream blog-posts citing this article. By the time you get to the CrunchGear article, only two albums are cited (Dark Side of the Moon +272%, and Oh No +77%) and then they act as if these results are typical.

Those are just digital album sales I’m talking about. But here’s something very interesting: CD sales of four of those five titles dropped sharply over the same period. CD sales of OK Go’s Oh No dropped 45%. CD sales of Coldplay’s A Rush Of Blood To The Head dropped 24%. Norah Jones’ Come Away With Me fell nearly 33%. Pink Floyd’s Dark Side of the Moon is down only 12%. Smashing Pumpkins’ Siamese Dream increased almost 15% — probably the result of the band’s new single and upcoming album hype.

The blogger seems to agree with the cannibalizing interpretation:

“The most likely scenario is one in which iTunes Plus — and the emergence of higher quality, DRM-free downloads — has somehow accelerated the CD-for-digital substitution that has eroded CD sales.”

What’s the point of all this? When you look at people citing one source after another, the information was filtered and twisted into a viewpoint that confirms their preferred beliefs. The original article said that “We know it increases sales to drop DRM” – a bold and unequivocal statement, but the follow the chain of links down to the original source and you find a much more complex picture – one that’s far more tentative and unclear, with unanswered questions and conflicting information.

This chart shows who dropped which information from their blog-post. BoingBoing dropped all the negative information about the decline in CD sales and the possibility that this was a temporary increase. Tech Crunch dropped some of the lower sales increases in favor of the high-sales increases and suggested they were typical.

On that note, I’ll quickly cite a second example along the same lines. This is another BoingBoing distortion: 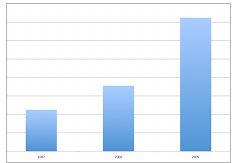 It’s been 18 months since O’Reilly, the world’s largest publisher of tech books, stopped using DRM on its ebooks. In the intervening time, O’Reilly’s ebook sales have increased by 104 percent…

Now, obviously, there’s been a big rise in the number of eReaders on the market in the past few years, so the claim that this rise is due to dropping DRM is questionable. What about the publishing industry as a whole? How have their eBook sales been going (which still include DRM)?

Now, I’m not arguing that the music and book industry should use DRM. Personally, I think it’s nonsense to sell DRMed music when they’re also selling CDs (which aren’t DRMed) where it’s trivial to turn them into mp3s and upload them. I’m just pointing out the distortion of the facts.

What’s really sad is the way information gets cut-up and edited to support a viewpoint that someone wants to advance — to create an alternate reality where “everyone knows X” even though “X” isn’t supported by the data. At each step along the way, information was removed to make the story more simple and convincing, but less accurate. Notably, this isn’t corporations distorting data to serve their own financial interests, but it’s “consumer advocates” who are doing the distorting to reinforce and promote their own views about the world.