This article came up on Slashdot today.

“Claims by the MPAA that illegal downloads are killing the industry and causing billions in losses are once again being shredded. In 2009, the leading Hollywood studios made more films and generated more revenue than ever before, and for the first time in history the domestic box office grosses will surpass $10 billion. … [N]either the ever-increasing piracy rates nor the global recession could prevent Hollywood having its best year ever in 2009. With an estimated $10.6 billion in consumer spending at the US and Canadian box office, the movie industry will break the 2008 record by nearly a billion dollars.”

They reference a TorrentFreak article claiming that domestic box office numbers are higher than ever — and, therefore, movie piracy isn’t having any effect:

Claims by the MPAA that illegal downloads are killing the industry and causing billions in losses are once again being shredded. In 2009, the leading Hollywood studios made more films and generated more revenue than ever before, and for the first time in history the domestic box office grosses will surpass $10 billion.

But, I don’t consider TorrentFreak to be a reliable source, and expect a big dose of spin coming from them. Too bad they didn’t provide any statistics so that we could see the trends. That’s okay. I will. Shown on the right are the total domestic (US and Canada) box office numbers, according to BoxOfficeMojo. The dollar amounts are in millions. (Hollywood Box Office, the original source for the $10.6 billion estimate has adjusted their estimate downward to $10.5 billion.)

Okay, you might see some trends here. There’s some pretty strong growth from 1980 until around 2002. Then, after 2002, the box office revenues hover between $9 billion and $10 billion a year.

Let’s take a look at those numbers in chart form. Strong growth up until around 2002, then some leveling off. But, the movie industry is still growing, right? 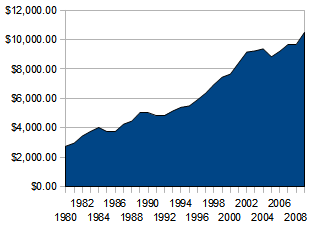 Well, if you consider that inflation is around 4%, you start to wonder if the movie industry is keeping up with inflation. What happens if we take a look at these same numbers and adjust for inflation using the Inflation Calculator?

This chart shows the inflation adjustment in the third column and the Inflation-Adjusted (2008) domestic Box Office numbers in column four. Once you take the inflation adjustments into account, you can see that 2009 wasn’t the best year ever. The best year ever for the movie industry was 2002. If box office revenue reaches $10.5 billion this year, after adjusting for inflation, it will be the fifth highest year, behind years 2001-2004. Here’s a chart of these numbers: 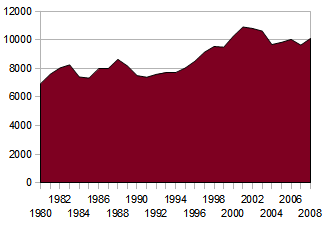 If we wanted to go one step further, we could also point out that the US and Canadian populations have grown from 227 million and 24.5 million in 1980 to 305.5 million and 33.9 million in 2009, an increase of 35%. Based on that, we can see that the movie industry’s growth in the past 30 years has been based on population growth. Per-capita spending has fluctuated a bit, and has declined by 14% since 2002. 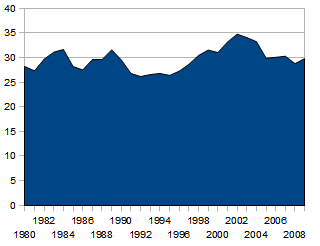 It’s not a horrible downturn, and it is similar to the decline seen in the early 1990s, but it’s also not an argument that piracy isn’t hurting the movie industry, nor is it “shredding” the claims that movie piracy is “causing billions in losses”.

I should also point out another interesting bit of spin. The Ars Technica article linked at the top says: What piracy? Movie biz sees record box office in 2008. Looking at that headline, it looks all wonderful for the movie business, doesn’t it? But, once you look at the inflation-adjusted numbers, you can see that 2008 numbers ($9.63 billion) were the worst numbers since 2000, and per-capita spending was the worst since 1997. Funny the tricks you can play when you don’t adjust for inflation.

* Graph of the music industry downturn since 1999: