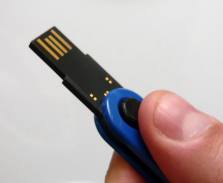 I picked up a new flash drive recently. This is a 4GB flash drive that I picked up for $15. (All the electronics are stored in the black plastic area you see here.) A quick look at Amazon reveals that they’re selling 128 GB USB flash drives. I’m amazed how small this stuff is.

John Carmack recently commented that working with Apple is a big pain. I know how companies like to control their image, but there are some times when it gets ridiculous. Retaliation for saying the wrong thing about them?

“My relationship with Apple has been long standing, but it’s a rollercoaster ride,” he told Kotaku. “I’ll be invited up on stage for a keynote one month and then I’ll say something they don’t like and I can be blacklisted for six months.”

Working with Apple on iPhone games has been no different, Carmack said, but he is happy to see that former collaborator Graeme Devine is now working at Apple in the iPhone Game Technologies division. (Source)

You’d think that someone as big as John Carmack would have enough weight to avoid getting these kinds of punishments.

Ever wonder why Google made Chrome, and started pushing it on www.google.com? Aren’t there already a perfectly good browsers (Firefox, Safari)? I was confused for a while until I thought about this.

Mozilla, the organization behind the popular Firefox web browser, has extended its search deal with Google for another three years. In return for setting Google as the default search engine on Firefox, Google pays Mozilla a substantial sum â€“ in 2006 the total amounted to around $57 million, or 85% of the companyâ€™s total revenue. The deal was originally going to expire in 2006, but was later extended to 2008 and will now run through 2011. (Source)

Google’s business is advertising. Maintaining its advertising sector means staying on top as the number one search engine in the face of upstarts like Microsoft Bing. Sure, Google can keep paying Firefox hundreds of millions of dollars to be the default search engine (which, by the way, Bing doesn’t appear on the Firefox Search-Dropdown at all). But, someone at Google must’ve realized that they don’t want to be at the mercy of Firefox. The more marketshare Firefox has, the worse the negotiating position is for Google. I’m sure Google doesn’t want to get in a bidding war with Microsoft over Firefox’ search window. Someone at Google obviously realized that even if they can take 20% marketshare from Firefox, that would reduce Firefox’ negotiating power, and save them a lot of money. Ideally, Chrome would eat-up all of Firefox’ marketshare. Chrome users are, by default, pointed to Google’s search-engine. It just makes sense for Google to drop a few million on their own browser rather than pay-off Firefox year after year.

So far, Google Chrome has made a strong showing; 30 million users after just 10 months, which is a heck of a trajectory. Firefox is around 330 million users (24%), and IE still has 2/3rds of the browser market.

In the smart-people-saying-dumb-things department, I ran across the comment below on a blog recently. (To be fair, I can’t actually vouch for Brad Armstrong being smart.)

The internet has enlightened me to how misunderstood the software and the software industry is. I like the “big corporations” spin; it’s always a good way to side-step people’s critical thinking centers of the brain. Maybe I should comment about the legal system being a right of all Americans, and therefore, he should have to work for free. I think it’s entirely fair to call someone a hypocrite if they demand that software developers work for free, while they work a job that pays their bills. Only full-time volunteers (40-50 hours/week) and people who give 100% of their income to charity are allowed to cast that stone. It’s irksome that software developers have to justify getting paid for our work.

I’m also thinking of becoming an anti-physical property believer. Everything should be shared with everyone. That’s the best way to meet everyone’s needs. The big corporations don’t want us to share because sharing means buying less stuff. This means that you’re a wicked and evil person if you stop me from borrowing your car, watching your TV, using your computer, and sleeping under your roof. Oh, and I’m inviting all my hippie friends. They don’t shower because it messes up the natural oils on their skin. If you try to stop me, I’ll just have to “beat the system in order to fight the big corporations who own the corrupt legal system” – i.e. I’ll take what I want. Ownership is a scam created by the big corporations!