2d Boy recently had a 1-year anniversary sale on their game “World of Goo”. The game normally sells for $20, but now you can pay whatever you want for the game (minimum of 1 cent). They also asked people why they paid what they did, and released statistics on how much people paid.

Here’s their bar-chart of the money paid and number of people at each price (click for a larger image): 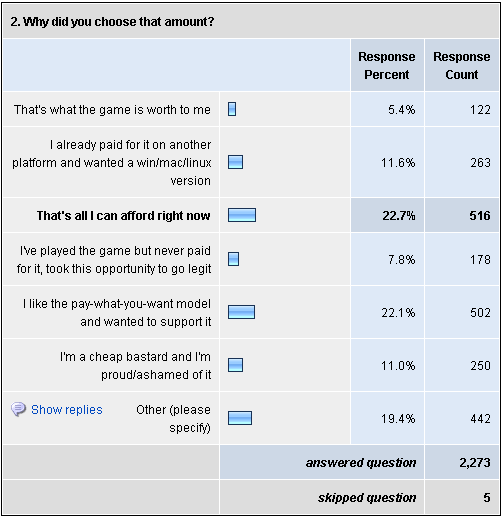 I have to admit that I’d thought about trying the “pay what you want” model for future games. It’s hard to interpret these results, though.

There are some reasons that this should be taken with a grain of salt, though. I can think of quite of few reasons why this payment was low. First, the game has been out of a year. This means that everyone who would’ve paid $20 for it probably already bought it. Maybe 2dBoy is picking up the people who were willing to pay for it, but weren’t willing to pay $20. Also, in the questionnaire, asking why people paid what they did, 11.6% said they already owned it on a different platform, so they were just giving 2dBoy a few dollars for the opportunity to have it on another platform.

Of the 12% who actually answered the survey, when asked “How much do you think this game should cost normally?”, 85% said this game should normally cost $10 or more. But, only 12% of survey responders actually paid $10 or more. And only 5% of buyers paid $10 or more. Based on the sales numbers, 23,335 people (41%) paid 99 cents or less, and less than a third paid $2 or more. This is one of my fears of the pay-what-you-want model; that people will admit that a game is worth X dollars, but a large majority will pay much less than that if they have the opportunity to pay you less.

For comparison, 2dBoy says that the game actually cost about $116,000 to produce. Although, $116,000 is their “minimum living expenses” cost. They said that it took two people two years to produce the game, and $96,000 covered their living expenses – which translates to $24,000 per person per year; which is not a decent living.

I’d like to be able to try to generalize these numbers, but there’s a lot of difficulty in doing that.

First of all, World of Goo is a very popular game. So, trying to vindicate the pay-what-you-want model based on “they already earned $100,000 and only spent $116,000” doesn’t work very well. Afterall, World of Goo is probably in the top 99th percentile of games produced. So, if they made $400,000 on a $116,000 investment (ie. a good profit), it would also mean that 95% of the games on the market would be showing losses in the same situation.

Second, the pay-what-you-want model generates free publicity. Since World of Goo is essentially a first-tier game, it benefits disproportionately from free publicity. A second or third tier game might get a lot less free publicity, and then they’d get less benefit. To put it another way, let’s say that pay-what you want causes people to pay you less money, but increases the number of buyers. The numbers for some fictional games might look like this:

Switching to a pay-what-you-want sales model, GameX (which is popular) gets lots of free publicity on gaming websites and blogs, GameY (which is obscure) gets a handful of mentions but remains obscure:

In the case above, GameY didn’t gain much in publicity, but it saw a sharp drop in the amount paid for their game. It would be a losing strategy in that case.

I also have to wonder about how pay-what-you-want model will change over time. Right now, it’s relatively novel, but if everyone did it, would the publicity decline — and, therefore, cause a decline in the profitability? In the survey, almost 1 our of 4 people said that they like the pay-what-you-want model and want to support it. But, if it becomes popular, will people stop supporting it because it is “established”? And what percentage of them paid higher amounts of money? Theoretically, the “we want to support pay-what-you-want” people could account for 100% of the people who paid $5 or more, and they could disappear as the model becomes more popular.